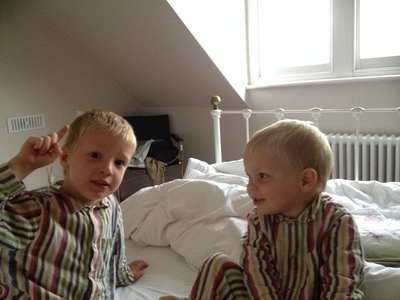 Time for the children to start sharing a bedroom

When we moved to Spain, nearly a year ago, my husband announced to me that our 2 young sons, then just 1 and 3 were going to share a room. I think my first response was "are you as mad as a goat?" (Spanish saying). We had recently spent a rather sleepless week in Spain, with them sharing a room, albeit a very small room. However, I could see my husband's point of view, the children's bedroom was very large and if they didn't share a room, one would have to take up the spare room and they wouldn't have much space as there is a large unmovable double bed in it.

Do they wake each other up?

So, they went into the same room with reasonably good results. Occasionally the oldest wakes up screaming and by the time I've hot-footed it downstairs, he has already woken up the youngest (who is the more 'fragile sleeper'). More often, the youngest wakes up. He is going through one of those 'phases' of waking up, apparently it won't last forever. In the meantime, he can cry for some time. (I keep meaning to dig out my ear plugs). If left in his own room, he will eventually wake up his older brother who surprisingly manages to sleep through quite a lot of crying. Normally, I put him in the travel cot in the spare room. The door in the spare room closes properly which means that his cries are muted somewhat.

I would happily have him in bed with us which is, I think, what he wants, but after about half an hour, he starts playing and singing and more to the point, I know it means he'll wake up again the next night.

On the whole, I would say putting them in the same room has been a good move. They clearly like being in the same room together. Some times the little one cries because the oldest has already gone to sleep and he doesn't have anyone to amuse him. Last night one of them was blowing raspberries to the huge amusement of the other. They talk to each other and sing before going to sleep. And in the morning occasionally they entertain each other before I've made it downstairs.

Soon perhaps they'll be making me breakfast in bed! 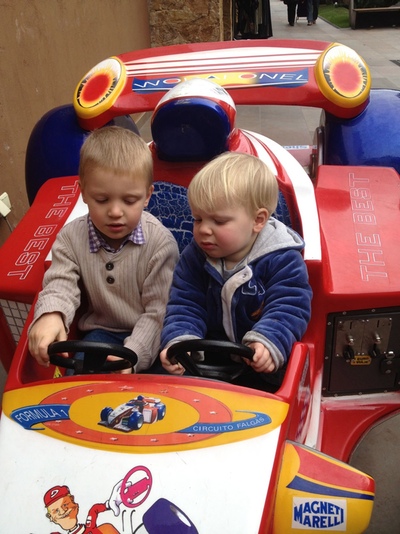