The Most Surprising Christmas Tradition You've Never Heard Of.

I walk down the street. The air is crisp and clean. The smoky smell of burning wood lingers in the air. Here in Catalonia, the fireplace isn’t just a cheery, festive treat. It’s a necessity to keep the house warm. Without it, your house gets cold. Bitterly, unpleasantly cold.

It’s the beginning of December, which means the arrival of our favourite Christmas tradition, “Tio de Nadal”. He is the seemingly innocent, smiling Christmas log that you see in the picture. What’s so surprising about that?

They do things differently here.

The children are putting the finishing touches to their glittering sparkling sticks. They have just finished decorating them and are waving them vigorously in the air.

What a quaint rustic tradition you think. Sticks and nature…

Hmm, it’s not what you expect.

Living in Catalonia, in a little town, can be a bit like stepping back in time. Even though it gets cold in winter, many houses don’t have central heating. The main sources of fuel are wood and gas. People still go out and collect wood from the copious pine forests to put on the fire. Gas comes in bottles. You can see people walking around with large metal bottles in prams, pushing them home.

The majority of houses have open fires. We’re lucky enough to have piped gas. We’re lucky enough to have central heating. (It works well but doesn’t have anything modern like a timer. My husband gets up every morning, goes down stairs and flicks the switch.) We are lucky but we still have a fire every evening during the winter. Not just because it’s pleasant, but because it’s a good way of keeping the house warm.

The Christmas Tio sits happily by the fire. He has a smily face, a christmas hat and a blanket to keep him warm. Sometimes he just appears in the house, just like a Christmas Elf. Other people go to the woods to “hunt” a Tio.

Throughout December (traditionally from Dec 8th, the annunciation which is a public holiday here) the children have to feed the Tio. They feed him kitchen scraps such as clementine peel and potato skins.

They feed him. He gets fat.

OK, ours doesn’t get fat as I’m too lazy to go and change him but the one at school grows and grows. As if by magic.

The children are ecstatic. They know they have to fatten the Tio up.

They are practising with their sticks. 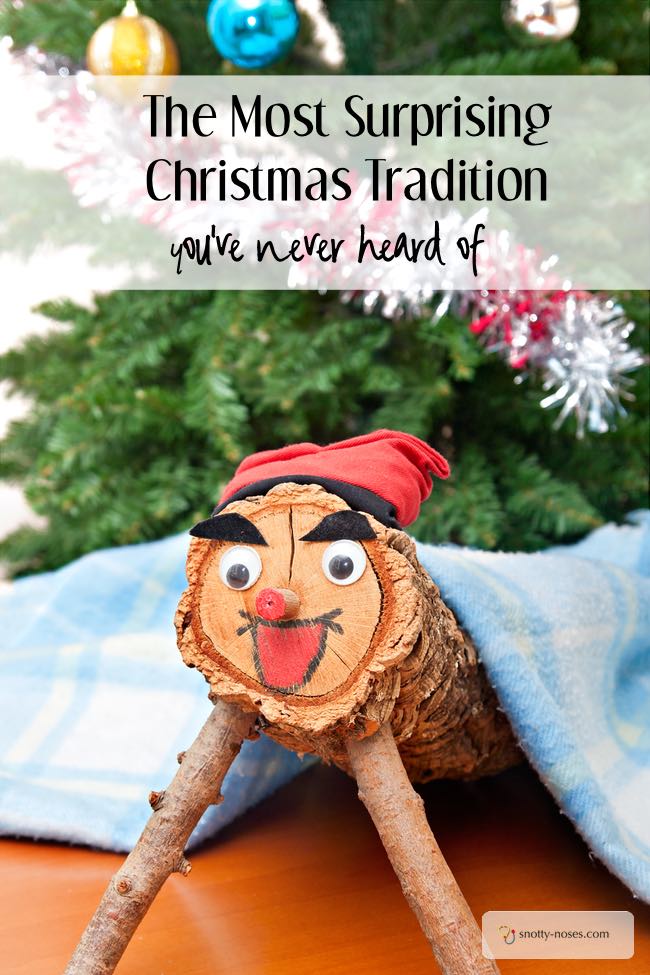 The Tio’s time of excitement is Christmas Eve. The children gather around and sing a song. The song is one of the first songs that children learn. It is the first song my children could sing. Their first words of catalan.

Still with me on the ‘quaint Catalan tradition’?

I remember our first Christmas here. Galen was 3 and had been at school a couple of months. Our neighbours were very impressed that he could sing the Tio song. He was so shy he sat under the table to sing it. He could hardly speak Catalan.

This is where the strangeness starts to creep in.

If you don’t poop properly, I’m going to hit you with a stick!

The song goes on…

But that’s not all!

The children, in accordance with the song, sing the song and beat the log with sticks. They take their beautifully decorated sticks, that they have been preparing with such love. They dance around the Tio, whacking it as hard as they can and sing at it to do a big poop.

They hit the present-poop-ing Christmas Log until he does a big present poop.

When they have finished, the Tio magically poops some presents (cleverly concealed by the blanket.) Traditionally these were special things to eat such as nuts, cheese and nougat. Nowadays, it’s generally sweeties or little presents.

When we all wake up on Christmas Day, the Tio has vanished.

As if by magic, he has taken himself back to the wood.

P.S. This is the only “poop Christmas tradition” that we have here in Catalonia. Every single nativity scene also has a little man squatting down to relieve himself.

I have no idea why!