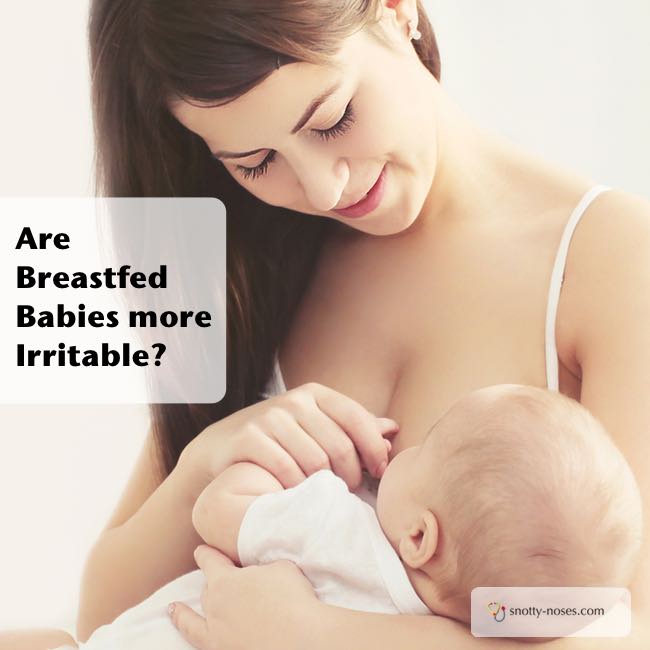 Breastfeeding is a fantastic way to provide nutrients for and bond with your baby. It can be difficult to establish. It is also possible that breastfed babies are more irritable than bottle fed babies. That doesn't mean give up on breastfeeding, but it is a good idea to be prepared for the possibility.

The Medical Research Council (MRC) published an article today in a journal called Plos ONE that said that breastfed babies are more likely to be irritable at the age of 3 months than their bottle fed counter parts. The paper suggests that mothers perceive the irritability as stress when in fact it is a signal of hunger and entirely normal. The authors say that breast feeding is still much better for babies than bottlefeeding and that this study is useful as it prepares mothers for the reality of breastfeeding.

One of the researchers, Dr Ong says (to paraphrase) that bottle fed babies may appear more content, but they may also be over-nourished and gain weight too quickly. He points out that as with adults, feeding is comforting.

Breastfed babies are much less likely to suffer with obesity later in life. It is much easier to overfeed bottle fed babies that breastfed babies for several reasons. Firstly, a breastfed baby has to work quite hard to get the milk. It normally takes at least 20 minutes to breast feed a baby whereas a bottlefed baby can devour a bottle in a couple of minutes.

Another reason is that all babies, whether they are formula fed or breastfed will be irritable at some stage. It can be really difficult to know why they are crying or unsettled. It may be because they are tired, hungry, over stimulated, under stimulated, have wind or a bit of discomfort. How are you supposed to know? If they haven't been fed that long ago, parents may give them some more milk. If they are breastfed, they can only get whatever is in breast (i.e. probably not that much if they weren't fed too long ago.) However, with a bottle fed baby, they can be offered a whole new bottle. And no doubt, whatever the original cause for complaint was, they'll be pacified with more food.

Lastly, a bottle fed baby's stomach may stretch due to the amount of liquid that they are given at once. This means that they'll want more next time they're fed. 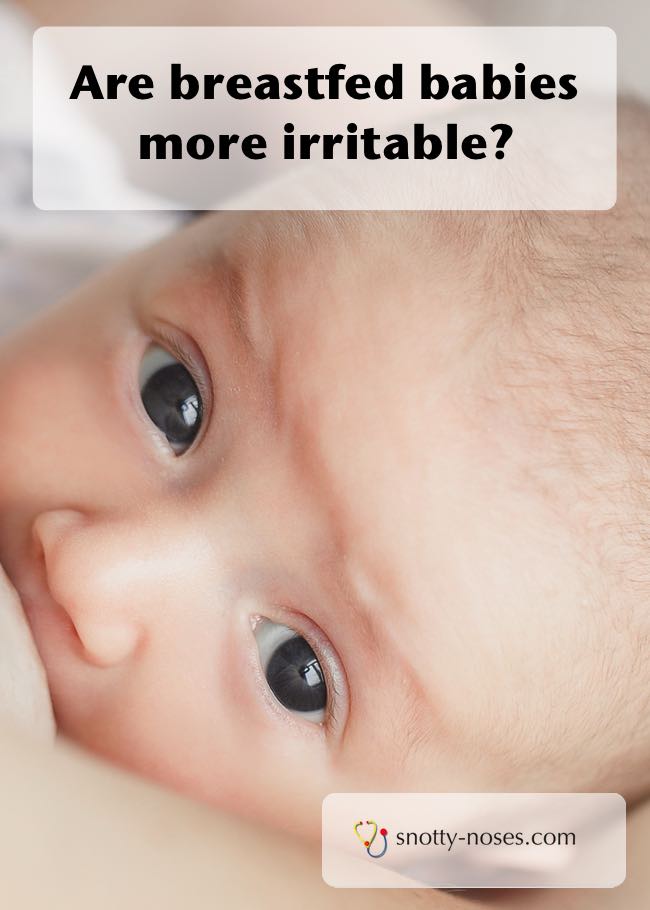 Irritability maybe why mothers give up Breastfeeding

The authors suggest that the extra irritability may be one of the reasons why mothers give up breastfeeding. In the UK, we have really low rates of breastfeeding compared to other countries. Many women do try to breastfed, but many give up. According to an article in Pediatrics (1), published in 2008, the most common reason cited was that "milk alone didn't satisfy my baby". The authors of the MRC study suggest that in fact, it may not be that the baby isn't satisfied, but that they are naturally slightly more irritable.

What do other studies say about irritability?

They do also point out that other studies have previously had conflicting results (some noted no difference and some noted that that breastfed babies were less irritable.)

All my babies were exclusively breast fed and I found none of them particularly irritable. I also found breastfeeding really useful when they were unwell as they found it so comforting. (You can continue to breastfeed even if your baby has diarrhoea or vomiting. Check out Snotty Noses section on vomiting.)

Breastfeeding can be difficult to begin with (both for the mother and the baby) but once established it is normally hugely satisfying for both and offers many benefits both for baby and mother.