When Your Toddler Refuses to Brush Teeth. 11 Fun Tips to Help.

There is nothing so frustrating as when your toddler refuses to brush their teeth! (OK, that's not true. Turns out there are loads of frustrating things about toddlers!)

My kids have turned the whole "making a fuss about not wanting to brush their teeth" thing into an art form.

Seriously. If my brain could think past the screaming I'd find it amusing and offer them an Oscar.

The lengths I have gone to encourage my kids to brush their teeth and still they refuse to even open their mouths.

“Open Wide Chicken!” I say as I tickle my son’s tummy. He’s sat on the bathroom counter, wrapped in a warm towel, flapping his dangling legs. “NO!” he says, pursing his lips together.

Sometimes, the simplest of tasks, such as brushing your teeth can become a mountainous hurdle when toddlers are involved.

My biggest tip is to make it fun, to keep it as light hearted as possible. As soon as you get stressed and upset about tooth brushing your kids will feel it and it will become a battle of wills that will just make you even more stressed and upset.

Instead, take a deep breath and try to find a fun and light hearted way to brush their teeth. 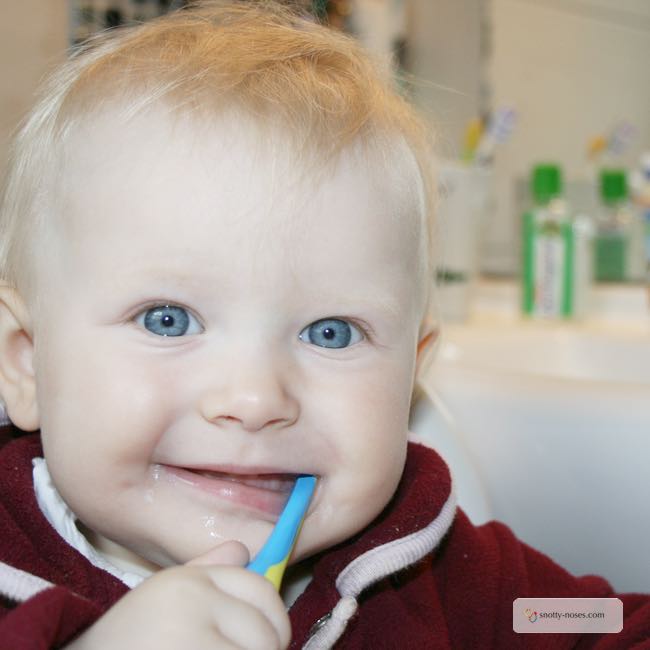 I sigh and wonder if holding his nose is an acceptable parenting technique. I’m suspect not, as tempting as it is, so cute and button shaped!

Brushing teeth at least twice a day, even when your child is little is such an important habit to get into. It’s so sad that many children have black and rotten teeth.

Toddler Diet is A Big Contributor to Tooth Decay

One of the biggest contributors to toddler tooth decay is the amount of refined sugar that kids eat. Healthy eating for kids is my passion so if you need some help in that department, sign up for the "Feeding Toddler Cheat Sheet " (this will take you to my site that is dedicated to "Happy Healthy Eating for Kids".

I know it can be super frustrating if you have a toddler won’t eat so here are my top picks for you on the "helping your toddler to eat a healthy diet" front:

Even if your kid does eat a healthy diet, they still need to brush their teeth to prevent cavities and decay.

There are a few tricks that you can use to encourage your toddlers to brush their teeth.

Tips to Help Get Your Toddler To Brush Their Teeth

When Your Toddler Hates Tooth Paste

When he was old enough to start brushing by himself I found a halfway house. He is allowed to brush his teeth in the morning by himself only using water and no tooth paste. (We have to make sure he has 2 tooth brushes so that one doesn't get contaminated with tooth paste!)

I have thought hard about this and find it acceptable for a few reasons. Firstly, he doesn't eat lots of candy and sweet things. (As you know "healthy eating for kids" is my thing and my kids are allowed one sweet treat such as cookie a day.) Secondly, according to my dentist, 80% of cleaning is in the brushing and 20% in the tooth paste. So if I make sure that I brush them properly once a day with tooth paste and he doesn't eat lots of refined sugar, I think this is a good balance to strike!

One of my lovely readers, who has also had a "major tooth brushing struggle" with her 4 year old has this advice to offer.

Think About Brushing Teeth Earlier in the Evening

Making it fun is certainly important. And timing is key as well. I find that if it’s too close to bedtime we risk being too tired and fussy, so starting earlier in the evening helps keeping everything positive.

We also play a little game where I have him repeat elongated words after me. Pohhh-leeees-caaaar, fiiiiiire-truuuuuck, hiiiipoooopohhhtamuuus! Usually something he relates to, like a game we recently played or movie we watched works well. This gets him to open wide and he’s proud showing off all the words he knows. Anything that strikes a 4 yr olds ego works wonders!

Giving a firm “its time to brush our teeth”. Followed by a choice like, “would you like to use the Batman or Captain America toothbrush ?“ works well on most days.

Alexis is a mother of 2 so knows the struggles that we face! She has 2 fantastic tips for us.

Use a Short Video Whilst Brushing Teeth

If needs be, brush their teeth while they’re watching TV or a short video on your phone. I know it’s not ideal but I can do practically anything to my children when they’re watching TV and I figure it’s worth a 2 minute Frozen video every now and then to just get a good brush done without a struggle.

Allow Your Toddler to Suck Some Tooth Paste

Parents should know that even if they can’t brush their children’s teeth some days, it’s ok as long as they still get some fluoride toothpaste on them. Every now and then, I let my 1year old just suck the tooth paste off his brush. It’s not perfect but at least he’s still getting the fluoride which is actually more important than the manual plaque removal.

One day I decided that enough was enough with the amount of fuss surrounding brushing his teeth. Sebastian is 5 now (no longer a toddler) and capable of his own decision making. I told him that he could either brush his teeth without a fuss or not brush his teeth. If he didn't brush his teeth he wouldn't be allowed to eat cookies, or bread, or breakfast cereal (anything that either turned to sugar in his mouth or contained refined sugar.) He would be able to eat yoghurt, fruit and vegetables.

Please note, if you offer a decision like that you have to be prepared to stick by it otherwise it will just turn into another power struggle.

I offered the decision calmly and explained it slowly several times.

He stopped and thought (with quite a grumpy face.)

Eventually he made up his mind that he was going to brush his teeth. (He LOVES carbs and I knew that is would be difficult for him to live off just apples, carrots and yoghurt but I was prepared to see it through.)

Since that time, we have had hardly any fuss with brushing. When he starts to make a fuss, I remind him of the choice.

I'm not sure I would offer this choice to a young toddler, but you know your child best!

Back to Sebastian the Toddler...

“Me want a car!” he says, kicking his legs and clamping his mouth tightly shut again.

I make the appropriate “brum-ming” noises and wave the toothbrush around in a car-like fashion.

He laughs and opens his mouth wide.

His toothbrush car drives happily into his mouth and I tell him what a good boy he is.

It doesn’t always go so smoothly, but for today, my toddler’s teeth are brushed and sparkling clean. 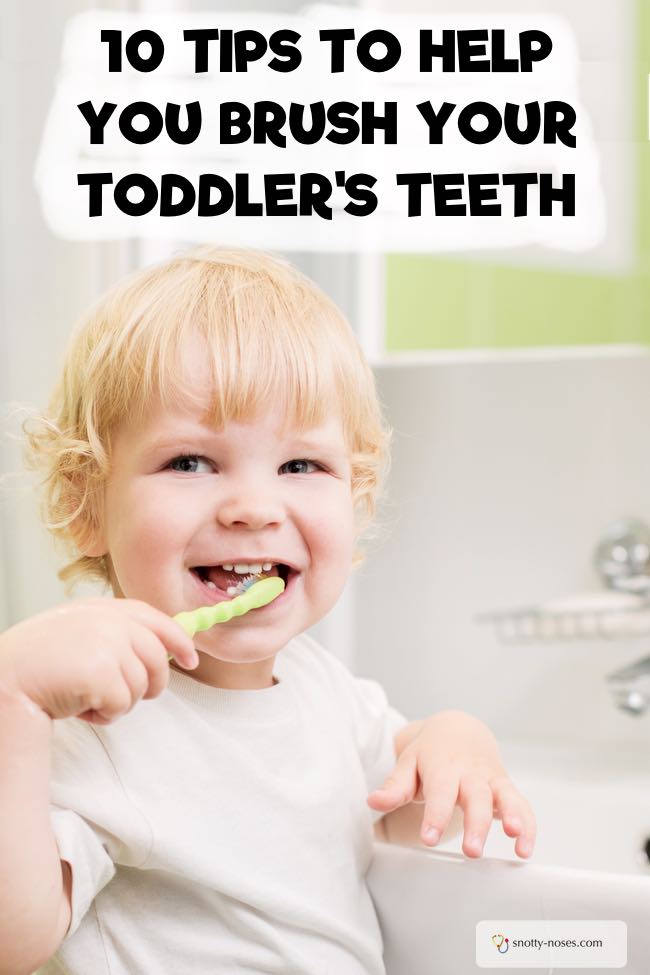